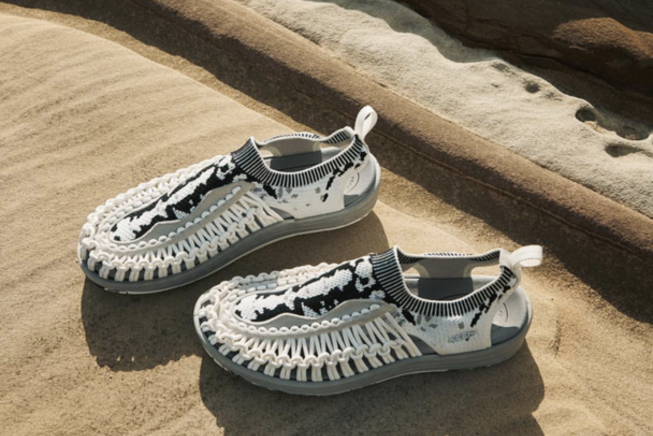 The Uneek Evo is an update to one of KEEN's most iconic and unique styles, the UNEEK. This project was dropped on my lap as a finished shoe without any story behind it. After meetings between marketing and product teams, it was decided that the UNEEK Evo should launch the "Open Spaces" story. This was a brand wide push to preserve and protect open spaces, or rather bring the efforts of the KEEN Effect team to the forefront of marketing and product. As of SS19 release, the UNEEK Evo was the top selling KEEN style in Japan.

The UNEEK Evo Iriomote was released with the Us 4 Iriomote campaign along with apparel and gear. 10% of sales goes to the protection of the endangered Iriomote Cat and Iriomote Island.

The Open Spaces story was narrowed down to Iriomote Island and the Iriomote Cat, the pattern is based on its unique speckled coat. Technical specifications only required a knit pattern and structure, colorways, and a footbed design.

I began my research by meeting with the KEEN Effect team and looking into the various sites they had been working to preserve across the globe. From these sites, I choose different endangered or threatened elements that I could draw inspiration from to create patterns and colorways.